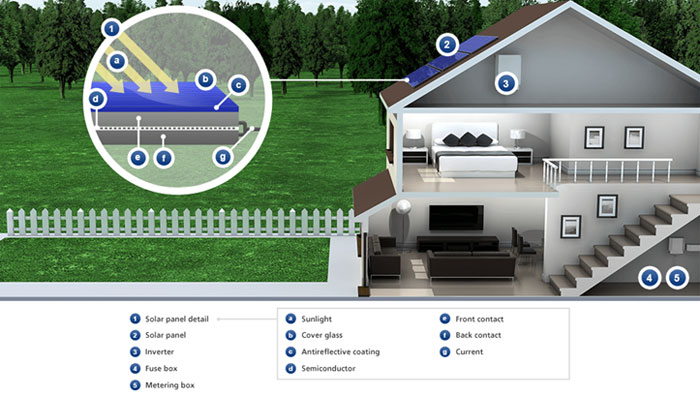 Solar panels turn energy from the sun’s rays directly into useful energy that can be used in homes and businesses. There are two main types: solar thermal and photovoltaic (or PV.)
Solar thermal panels use the sun’s energy to heat water that can be used in washing and heating. PV panels use the photovoltaic effect to turn the sun’s energy directly into electricity, which can supplement or replace a building’s usual supply.
A PV panel is made up of a semiconducting material – usually silicon-based – sandwiched between two electrical contacts. To generate as much electricity as possible, PV panels need to spend their time in direct sunlight (1a). A sloping, south-facing roof is the ideal place to mount a solar panel.
A sheet of glass (1b) protects the semiconductor sandwich from hail, grit blown by the wind, and wildlife. The semiconductor is also coated in an antireflective substance (1c), which makes sure that it absorbs the sunlight it needs instead of scattering it uselessly away.
When sunlight strikes the panel and is absorbed, it knocks loose electrons from some of the atoms that make up the semiconductor (1d). The semiconductor is positively charged on one side and negatively charged on the other side, which encourages all these loose electrons to travel in the same direction, creating an electric current. The contacts (1e and 1f) capture this current (1g) in an electrical circuit.
The electricity PV panels (2) generate is direct current (DC). Before it can be used in homes and businesses, it has to be changed into alternating current (AC) electricity using an inverter (3). The inverted current then travels from the inverter to the building’s fuse box (4) and from there to the appliances that need it.

PV systems installed in homes and businesses can include a dedicated metering box (5) that measures how much electricity the panels are generating. In the UK, as an incentive to generate renewable energy, suppliers pay the owner a fixed rate for each unit of electricity it generates – plus an additional amount for units the owner doesn’t use, because these can supply the national grid.

Solar power is a renewable and almost inexhaustible energy source and can be considered a secure source because it does not need to be imported – but the amount of energy that can be harnessed to generate electricity is limited by current technology.

In countries with much intense sunlight, PV panels can be a cost-effective way to generate electricity as solar panels are most effective in direct sunlight. The carbon footprint of solar PV is small and shrinking, as the materials used in PV panels are increasingly being recycled. Solar capacity in the world is growing at a significant rate.

Solar power is usable energy generated from the sun in the form of electric or thermal energy. Solar energy is captured in a variety of ways, the most common of which is with photovoltaic solar panels that convert the sun’s rays into usable electricity.
Solar energy is a clean, inexpensive, renewable power source that is harnessable nearly everywhere in the world. Any point where sunlight hits the surface of the earth is a potential location to generate solar power. And since solar energy comes from the sun, it represents a limitless source of power.
Interested in benefiting from solar power? Solar panels are installed at three main scales: residential, commercial, and utility. Residential-scale solar is typically installed on rooftops of homes or in open land (ground-mounted) and is generally between 5 and 20 kilowatts (kW), depending on the size of a property. Commercial solar energy projects are generally installed at a greater scale than residential solar. Though individual installations can vary greatly in size, commercial-scale solar serves a consistent purpose: to provide on-site solar power to businesses and non-profits. Finally, utility-scale solar projects are typically large, several megawatt (MW) installations that provide solar energy to a large number of utility customers.
For some solar shoppers who may not be able to install solar on their property, community solar is a viable solar option that more directly connects utility-scale solar energy projects to residential consumers. As such, community solar farms are typically built in a central location as opposed to on any single customer’s property. Residential consumers can subscribe to a community solar project to receive many of the benefits of solar power without installing solar panels on their property.

A brief history of solar power

In 1954, Bell Labs developed the first silicon photovoltaic cell. Although solar energy had previously been captured and converted into usable energy through various methods, only after 1954 did solar power begin to become a viable source of electricity to power devices over extended periods of time. The first solar cells converted solar radiation to electricity at an efficiency of 4 percent – for reference, many widely available solar panels today can convert sunlight to solar power at above 20 percent efficiency, a number constantly on the rise.
Although adoption of solar energy was slow at first, a number of state and federal incentives and policies contributed to driving down the cost of solar panels far enough to become more widely adopted. At this point, solar power accounts for enough capacity to power 11 million of the 126 million households in the country.

The cost of solar energy

Concurrent with an increase in solar panel efficiency, the cost of solar energy has fallen substantially. In the last decade alone, the cost of a solar panel installation fell over 60 percent, and many industry experts predict that prices will continue to fall in the years to come:

Additionally, depending upon where you live, several rebates or incentives for solar power may contribute towards lowering the cost of solar energy even further.

The rapid proliferation of solar power nationwide and globally has also led to parallel growth in several adjacent areas. Notably, energy storage systems and electric vehicles are two sectors poised to explode alongside solar power by augmenting the benefits of solar.
Given that solar panels can only produce power when the sun is shining, storing produced but unused energy throughout the day for use at a later time has become increasingly important. For instance, solar batteries store electricity and can be drawn on during periods of low solar production. What’s more, solar-plus-storage solutions work for all scales of solar panel installations and provide many added benefits, from energy reliability to grid resiliency and lower-cost power.
Electric vehicles are a second product poised to ride the wave of solar energy adoption. With lower maintenance costs, lower fuel costs, and a lower environmental footprint than traditional internal combustion engine vehicles, electric vehicles are set to be an important piece of the automobile industry for years to come. With increasing electric vehicle adoption also comes a growing need for electricity to run the vehicles, a perfect fit for solar energy. Distributed solar installations provide cheap and reliable power for electric vehicles directly from the sun. In a world of increased electrification throughout the home, solar power is one of the most inexpensive, reliable, and cleanest ways to fuel our electrified future.